Influence of prospect payments on pricing OR should you charge more for your iPhone app?

While discussing the issue of how consumers get converted from prospects to customers in one of the MBA classes and later on in the Marketing Research class, a thought occurred in my mind. Should (and do) companies take into account and adjust the pricing of their specific offering according to the customer propensity to purchase on a specific eco-system? 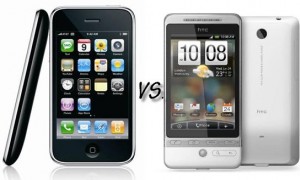 As I read somewhere long ago, Amazon did that till 2001 using cookies but had to stop that practice. However, if a small scale supplier does it, will it actually be noticeable? How ethical would that be?
Let me take an example. We all know that Apple consumers generally pay more for every mainline and peripheral product in comparison to their PC counterparts. I do not wish to dwell on the functionality comparison and such other issues but in reality when you are prepared to pay more for within a particular eco-system, can it be exploited by others who also provide services within that eco-system?
Think about an app provider who supplies his apps to consumers on two competing mobile eco-systems of Apple app-store and Android marketplace. In this case, keeping in mind the propensity to pay higher amount of money from the Apple consumers, should the app provider charge more money for the app than on Android marketplace?

Like many consumers, who hardly compare prices (I know some of us do but most don’t), supermarkets exploit this window of opportunity like anything and supply products at different prices. If that is feasible between two supermarkets, can it not be taken into account by mobile eco-systems? So, should app suppliers take into account the prospect payment psychology in pricing their apps?