While luxury in Asia is booming with the rise of new money and an affluent consumption class the picture is not rosy for all the luxury brands emerging within or outside of Asia. Some stellar examples of struggle involve Prada and Mulberry in China, Aigner and de Grisogono in India and Ermenegildo Zegna entering, leaving and re-entering Indian market. Moreover, with Chinese gift-giving on sudden decline with the subtle message from the premier, many luxury brands have their work cut out in present and future regarding how to succeed in these rapidly growing but ever so competitive and fickle markets of Asia.

In a recent research paper, published in the journal ‘Marketing Letters’ my co-authors, Jaywant Singh (Kingston University, UK) and Madhumita Banerjee (American University of Sharjah, UAE), we attempted to decipher the underlying value perceptions that drive luxury consumption among 3 of the largest emerging Asian economies, namely, China, India and Indonesia.

So, why companies are failing in Asia?

Well, let me start with the problem first. Analysts ascribe the underperformance of some luxury brands in Asia to over-expectations from the market and, crucially, to treating many Asian markets as homogenous. Asia cannot be approached as a laggard market anymore wherein consumers will buy anything foreign and especially with European heritage. While business analysts and research scholars emphasize the diversity and uniqueness of individual country markets in terms of geography, demography, culture, and consumption patterns, market realities suggest that many Western luxury businesses might have erred in considering Asia as a homogenous market. Many a times in our own travels we have seen the same adverts, the same message and the same communication means employed by luxury brands across Asia to serve these vastly different markets.

What made us wonder was how come these top luxury brands did not see the significant differences within these markets? OR were they blinded by their own regal impressions of themselves in their own minds which did not resonate with the Asian consumers? This homogenous treatment of Asian consumers baffled us and hence we asked the question as to:

• What underlying values consumers in Asia associate with luxury brands?
• How can a luxury brand profit from these rapidly growing, competitive and diverse markets?

We all buy and consume what we believe offers value. Hence, value is one of the fundamental drivers of consumption decisions. For regularly consumed products, value can be largely derived as a trade-off between costs (mostly price) and benefits (utility). However, in case of luxury goods, this equation becomes significantly more complex as costs are considerably high and at the same time the benefits are not just utility oriented but significantly more hedonic in nature at personal as well as social level.

There is a lot of work carried out with regards to luxury value perceptions including my own work which examines various developed and emerging markets and how consumption psychology based on value differ in these markets.

The symbolic dimension gets reflected in the social signals which are constructed through the narrative associated with the brand’s meaning, myth, stories, and consumer’s own wealth, prestige, and social status. The functional dimension relates to the material embodiment which reflects in physical manifestations, such as quality of material and craftsmanship. The experiential dimension is associated with subjectivity and is idiosyncratic, as it differs from person to person. It gets reflected through sensations, feelings, cognitions, and behavioural intentions aroused by brand-related stimuli such as logo, packaging, advertisements, and store environment. 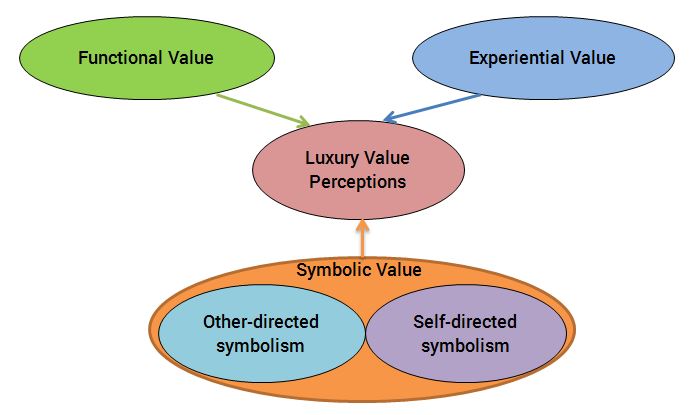 We asked luxury consumers in India, China and Indonesia about their luxury value perceptions with a sample size of more than 600 luxury consumers and employed structural equation modelling to analyse the results.

So, what Indian consumers value the most?

In India, the construct of other-directed symbolism is found to be significantly related to luxury value perceptions, conforming to the crucial role of the instrumental aspect of impression management. Thus, the Indian luxury brand consumers seem to be influenced by what others think of them and therefore consumes in a way to influence others in order to achieve societal acceptance, reflecting the hierarchical nature of the society (vertical collectivist). They use luxury brands to indicate social status. More importantly, luxury brands are used in India as a means to symbolize achievement, wealth and prestige.

Moreover, the functional value perceptions were also significant among Indian consumers which show the significant utility value consciousness. These findings also show similarity to what my earlier research on Indian luxury consumers highlights.

How to market luxury to Indian then?

India’s luxury consumers has always been well-travelled and discerning. However, the emerging market landscape demonstrates that the Indian consumers are even more globally aware, more discerning and more demanding. Marketing a luxury brand to Indian consumers by stating the European heritage and highlighting foreign origin may not work as these consumers are globally tuned. Moreover, they have a strong Indian luxury heritage connection. So, a luxury brand which wants to establish itself in Indian market will have to work on social acceptability and symbolism of achievement, prestige and wealth. This wealth connection will also get integrated with the functional value wherein Indian consumers associate higher price with high quality and desire more that is hard to get. The higher price and social symbolism offers a significant meaning to a luxury brand for Indian consumers.

In the next part, I shall compare the constituent value perceptions among Indian, Chinese and Indonesian consumers.