When joining the ‘luxury society’ group, one of the interesting questions they asked was to provide your own definition of luxury.

My response to that was “luxury is a state of mind. It is about how you carry yourself and fulfil yours as well as others desires”.

My idea focused on the issue of luxury from the perspective of self and others. One does not consumer luxury for just oneself but it is very much socially oriented consumption. For example, why do wear the best suit (dress) when going for an important meeting or interview? Why do we make sure that we do not use a cheap perfume when going on a date? The aspect of self-indulgence is intertwined with the socially directed motives when it comes to luxury.

However, the questions asked at luxury society really made me think about how we define luxury. 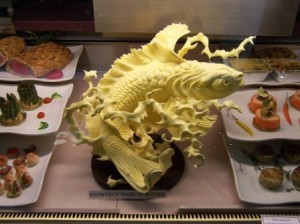 luxury as a mythical creature

The concept of luxury has been present in various forms since the beginning of civilization. Its role was just as important in ancient western and eastern empires as it is in modern societies. With the clear differences between social classes in earlier civilizations, the consumption of luxury was limited to the elite classes. It also meant the definition of luxury was fairly clear. Whatever the poor cannot have and the elite can was identified as luxury.

With increasing ‘democratization’, several new product categories were created within the luxury market which were aptly called – accessible luxury OR masstige luxury. This kind of luxury specifically targeted the middle class (or what is sometimes termed as aspiring class). As luxury penetrated into the masses, defining luxury has become ever so difficult.

In contemporary marketing usage, Prof. Bernard Dubois defines ‘luxury’ as a specific (i.e. higher-priced) tier of offer in almost any product or service category. However, despite the substantial body of knowledge accumulated during the past decades, researchers still haven’t arrived on a common definition of luxury.

While the word ‘luxury’ is used in daily lives to refer to certain lifestyle, the underlying construct’s definition is consumer and situation specific. If you earn less than $ a day, an ice-cream would be a really big luxury item for you. On the other hand, if you are going to a party with some big-wigs a $100,000 car may not be a luxury. The word luxury originates from the Latin term “luxus” signifying, “soft or extravagant living, indulgence, sumptuousness or opulence”. However, luxury is quite slippery term to define because of the strong involvement of human element and value recognition from others.

Many other attempts have been made to define luxury using the price-quality dimension stating higher priced products in any category is luxury. Similarly, researchers have used the uniqueness aspects of luxury too. However, with increasing quality orientation from lower end brands and massicification of luxury, it is hard to use either of the above dimensions to define luxury.

Prof. Jean-Noel Kapferer, takes an experiential approach and defines luxury as items which provide extra pleasure by flattering all sense at ones. Several other researchers, focus on exclusivity dimension and argue that luxury evokes a sense of belonging to a certain elite group. However, having an LVMH hang bag in central districts of any big city across the world, won’t make you feel that way. Rather in one of the earlier posts when I asked the question ‘if others can have it, is it luxury?’ consumers responded clearly saying that LVMH and Gucci are losing their lustre by the day in their minds.

The discussion above highlights the extremely subjective and multidimensional nature of the luxury construct. The attempts very much define a dimension of luxury such as high price, high quality, uniqueness, exclusivity etc.

However, it is still unclear ‘What is Luxury?’

So what do you think is luxury?