If you want an answer to this question as to

in one word, it is

It pays off big time when you keep an eye on your competitors’ activities. How do I know this? Well, Tej Adidam at University of Nebraska at Omaha, Madhumita Banerjee – University of Warwick and I recently published a paper titled “Competitive intelligence and firm’s performance in emerging markets: an exploratory study in India” in the Journal of Business and Industrial Marketing. 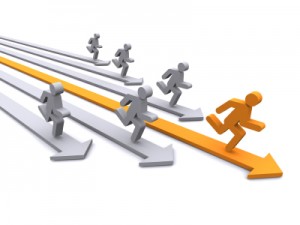 It seems long time ago; Tej asked an interesting question in one of our interesting exchanges about is Competitive Intelligence (CI) really helpful? Looking through the literature, we saw lots of anecdotal evidence and it seemed that most of the CI papers discussed the questions such as how is CI conducted in various parts of the world? What are the players involved in CI activities? What type of firms conduct CI activities? There were several other such questions asked and answered including the usage and dissemination of CI within firms.

Let me first be clear about Competitive Intelligence. The word CI does not mean corporate espionage and such negative things. It means, a system of environmental scanning that integrates the knowledge of all organizational members and encompasses marketing, structural, strategic and other organizational elements. The concept of CI has strong underpinnings in military science and has a rich history dating back more than 5,000 years. In recent history, especially in the field of management, the concept has been studied for considerable time under different titles. For example, it has been called “environmental scanning”, which focused on how executives “scan” their organizations’ environment. Similarly, over time, other labels have been used in prior studies to describe competitive intelligence as “business intelligence”, “competitor analysis” and “market intelligence”. CI is used in tracking the activity of direct and indirect competitors including their general business activities, tactics and strategies relating to various important issues such as market penetration, product development, patent registrations and so on. Thus, if we were to compare environmental scanning and CI, we can conclude that the former is a method of gathering information. CI takes this information, and converts it into knowledge of one’s competitors or a group of competitors which is used by various departments within an organization to make strategic decisions. In other words, environmental scanning is considered as the first step in CI.

As we all (i.e. Tej, Madhumita and me) had first-hand experience of working in the corporate environment of India, we decided to use India as a context for our study. Interestingly enough, there were no earlier studies we could find which focused on CI practices in India. So, it was like treading uncharted waters, and it was quite exciting too and it turned out to be fruitful in the end.

We tried to answer the following questions:

We used a stratified sample developed from a variety of mailing lists focusing on Indian firms. Confederation of Indian Industry (CII) was also quite helpful for this study. You can read more about the methodology in the paper.

As this post is getting too long, I will only tackle Question 1 we asked above in this part and will tackle the other 3 parts in the next post.

Do Competitive Intelligence activities have an impact on the market performance of Indian firms?

As I stated earlier, historically, analysts and researchers agree that better CI will improve firm’s overall performance in the marketplace. But most of this evidence is anecdotal and not empirically proven. In their study of 85 US firms, Subramanian and IsHak (1998) found that firms having advanced systems to monitor market trends exhibited great profitability. So, the positive relationship between CI and firm performance is empirically tested in the Western developed markets context. But, these markets are comparatively more stable than emerging markets like India. The emerging markets are changing directions too rapidly and the direction is highly unclear in terms of almost every macro and micro parameter. In such a scenario, can CI really help? Or as they say in India, let the lady luck play its part as you cannot do much about it.

Following the same typology as Subramanian and IsHak (1998), on the basis of the levels of CI activities carried out, we segregated our sample of Indian firms into ‘primitive’, ‘intermediate’ and ‘advance’.

The results indicated that those Indian firms with high (i.e. Advance) levels of CI activities perform better than those with low (i.e. primitive) levels of CI. Thus, the results indicate a positive linkage between a firm’s performance and level of Competitive Intelligence activities. We must highlight thought that this is not a causal linkage but a positive linkage. We found a large sample of our study (59 %) in the ‘primitive’ category. Therefore, it is not surprising to note that 63% of Indian firms were unsure whether CI activities led to any increased revenues and/or profits. However, there is clear evidence that those firms that are exhibiting higher levels of CI activities are indeed achieving better financial performance results.

We hope that these results would motivate more Indian firms to invest more in CI activities and programs. In the next post, I will focus on the other 3 question we answered in the paper and help the implementation process of competitive intelligence by identifying key macro and micro drivers of CI for Indian firms, organization of CI activities and usage and dissemination CI.